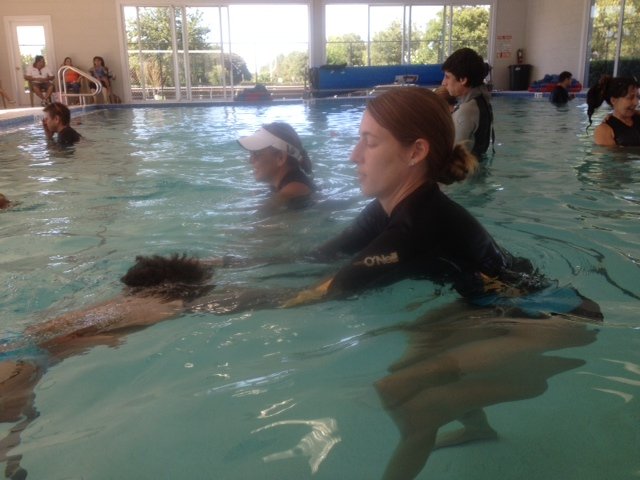 Summertime, and Infant Aquatics continues to train instructors worldwide. Our newest instructor is Mariajose Artavia Oreamuno from San Jose, Costa Rica. Affectionately known by her students as MJ, she completed her training in July, while 7 months pregnant with her second child. Mariajose is a former professional swimmer from San Jose-Costa Rica, who worked as a nutritionist doing medical research and clinical trials until the birth of her first child in December 2012. After her son was born she began researching survival swim programs and discovered Infant Aquatics. She realized that there was no comparable program in Costa Rica and wanted to offer our innovative course to families in her country.

MJ's training partner was Darla Bradford. Darla's history with Infant Aquatics dates back to 2003, when she brought her then 5 year old son with intense water fear for lessons. Her bright child has a high functioning form of autism that is similar to Asperger's Syndrome. Darla recognized the importance of overcoming his fear and was amazed to witness her high-anxiety son confidently swim across a pool in full winter clothing in only two weeks. Darla realized that water survival skills were not an option for her second son, who started lessons at 18 Swim instructor Darla Tatummonths. She joined the staff at Swim Float Swim! last fall as a stroke instructor, and has earned the admiration and respect of students and parents alike.

Darla writes: "I am a devoted believer in infant aquatic survival skills. I am so excited to now be learning how to teach skills that have helped make such a positive contribution in my own children's lives."

Cathy Perez grew up in Fort Lauderdale, FL and moved to Orlando in 1998 to attend the University of Central Florida where she met her college sweetheart, now husband, Hector. She graduated from UCF with a BS in Radiological Sciences and started her career working at the local trauma hospital. After several years working as a Radiologic Technologist she transitioned into a training role traveling throughout the country.

Cathy was initially introduced to survival swimming when she enrolled her daughter at nine months old. She immediately realized the importance of children learning these skills. As a mother of two young children, Lyla, 4 years old and Joel, 1 year old, she has seen first-hand the lack of knowledge in her community and wanted to be part of making a change. Her love of water, love of children and training experience inspired her to become a survival swim instructor. She is excited to become a part of Infant Aquatics to make a change in her community and the lives of children by providing the skills for them to be safe around water.

Cathy Perez teaching infant survival swimming Welcome to Mercedes Gatti who completed her Infant Aquatics training in August. Mercedes has been a childcare provider for nearly two decades and is thrilled to be able to provide access to drowning prevention resources to the community of Bakersfield, California by offering children the chance to learn water safety skills. We are pleased that Mercedes has chosen to join the Infant Aquatics group.

Two new instructors have completed their training and are ready to hit the water. SarahAnne Logan will be teaching in Rosehill, Kansas, a suburb of Wichita. SarahAnne is transplanted from California, where she was active duty in the Marine Corps. She is currently working on her degree in Business Management and Marketing She and her husband John, have 3 children.

Donna Minor is teaching in the Waco, Texas She graduated from Texas A&M University. She retired from Robinson ISD after 30 years of teaching elementary physical education. She is excited to be able to satsify her passion for teaching children through Infant Aquatics.

We are pleased to announce that Amy Borden completed her training in August. Amy and her husband, a pastor, and their young son reside in the Padre Island area and are expecting Baby #2 in the spring of 2015. Amy, a native of Corpus Christi, was inspired to seek out Infant Aquatics lessons for her little boy and was so impressed by his skill acquisition that she decided to become an instructor and continue to teach other children to be safer around the water. We are delighted to welcome Amy to the Infant Aquatics network.